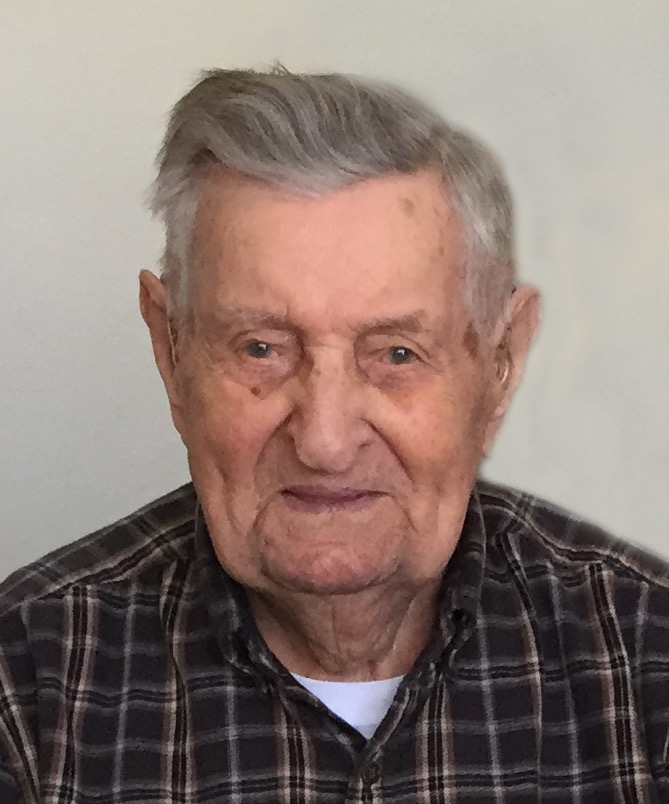 A funeral service will be celebrated at 10:30 A.M. on Friday, June 14, 2019, at the First United Methodist Church in Algona. Burial will be in Burt Township Cemetery. Visitation will be held from 5-7 P.M. on Thursday, June 13, 2019, Oakcrest Funeral Services, Algona.

Robert Carsten Lovstad was born on March 29, 1923, in Burt. He was the youngest of eleven to Edward and Anna Marie (Jessen) Lovstad. He grew up in Burt, graduating from Burt High School in 1941. Following his school years he began his love for farming. The farm operation included caring for his cow/calf herd, raising hogs, sheep, and chickens.

On April 19, 1945, he was united in marriage to Shirley Voyles in Algona. They lived on the farm in Burt until retiring in 1981 when they moved into town. Robert loved the land, and always enjoyed farming. He helped his nephew Gene Lovstad farm for 12 years. Following retirement, he worked at the Burt Elevator for six years.

Robert had a great love for his family. He always enjoyed attending his three children's activities. Robert loved spending time with his grandchildren and great-grandchildren. He also enjoyed fishing, and visiting with others. He was an active member of the Methodist Church in Burt until closing. He then transferred to the First United Methodist Church in Algona. He served many different church offices including being the church trustee and many years as an usher. He was an avid Iowa Hawkeye fan watching their football and basketball teams.

He is survived by his children, Susan and John Wesselink of Eagle Grove, Robert Lovstad of Storm Lake, Sandra and Rex Chally of Algona; eight grandchildren, eight great-grandchildren; and many nieces and nephews. He is also survived by brother-in-law Hanford Voyles of Lytton, IA and sister-in-law Audrey Reilly of Walnut Creek, CA.

Preceding him in death are his parents; wife, Shirley in 2015; and ten siblings.

"Uncle Bob was special. We always knew we could find him in Saturday night church where we would join him. One memory that my girls and I will treasure was sharing a meal with him at McDonald's after church. He shared his love story with us and advised my girls to wait for love. I am sure he and Shirley are dancing in heaven. So glad he was able to visit many of us a few weeks ago at Hallie's grad party. Life well lived!"

"How could you not like Bob! His eyes would dance when you carried on a conversation with him. His memory and remembering everybody's names was just unbelievable! Bob you touched a lot of lives! Very proud to have some Lovstad blood in our family! My condolences to his family."

"Allways enjoyed visiting with Bob while my mom was at Good Sam, usually playing some game. So sorry. chuck schrader"

"So sorry to hear about Bob, Loved stopping and talking to him when we were out on the golf cart. We will miss him Prayers for all of you. RIP Bob"

"Bob was such kind man and very knowledgeable. He would always stop by Mike's shop and we learned a lot about the history of Burt. He was so appreciative when I would drop off some of my homemade goodies. Our sympathy goes out to you. Mike and Mary"

"Susan, Bob, Sandra and families. You have our condolences on the passing of you father and grandfather. Your dad grabbed my hand as I was walking past him at my brother (Dave Harms) funeral , and he said hi Mary, he knew my name, what a memory he still had at age 96, so we hugged and had a nice chat. We Harms's had so many fun times with your family growing up on the farms. We will not forget your dad. God is with you all."