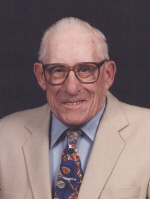 Ed moved to California in March 1942 and was initially employed by Rohr Industries making parts for the B-24. He then worked with Ryan Aeronautics until 1946, when he went to Consolidated Vultee, which was then acquired by General Dynamics. He worked for General Dynamics for 33 years retiring in 1980.

Edward married Elizabeth Anna McDowell in September, 1949 in San Diego, CA. She was a registered nurse working at various hospitals in the San Diego area. Ed and Betty was champion roller skaters, entering there first contest in 1954, where they won 1st place in novice category. They continued winning championships into the 1960's. Ed was an avid bowler; he enjoyed collecting U.S. and foreign coins, and was an award winning orchid grower. Ed was a member of the St. John's Catholic Church and the Knights of Columbus.

He was preceded in death by his parents; four sisters, Mary Lieurance, Frances Manners, Gertrude Anthony, and Leona McGregor; and three brothers, Henry (HK), Leo, and a brother in infancy; two half brothers; and one half sister.