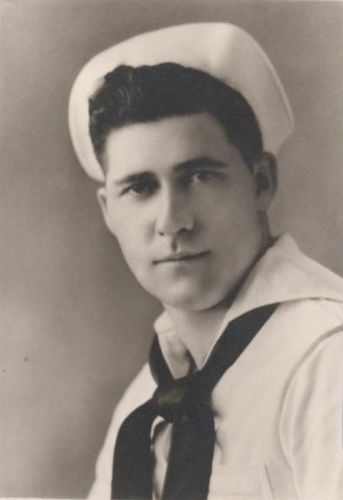 F1c William H. Kennedy, 24, of Titonka died December 7, 1941, in Pearl Harbor, Hawaii on board the USS Battleship Oklahoma when the Japanese attacked Pearl Harbor at 8am that Sunday morning. After 75 years, the remains of Fireman 1st Class William H. Kennedy have been identified and will be brought home for burial next to his mother in the Buffalo Township Cemetery, Titonka.

Planeside honors will be conducted at 11:00 AM on Thursday, May 11th on the tarmac of the Des Moines International Airport. His body will be escorted to Titonka where the public can pay tribute from 5 to 7 PM Thursday evening at Oakcrest Funeral Services of Titonka.

A funeral service will be Friday, May 12th, at 10:00 AM, at the Titonka United Methodist Church. Military graveside honors will follow at the Buffalo Township Cemetery conducted by the United States Navy Honor Guard, the William H. Kennedy VFW Post # 4071 of Titonka, and many other local American Legions and VFW Honor Guards.

William H. "Willy" Kennedy was born on April 6, 1917 in Swea City, Iowa. He graduated from the Titonka High School in 1934. He loved to play baseball with both the high school and town teams. After graduation he worked for a local farmer, drove truck for Harold Miller, took a diesel engine course in Des Moines and attended a business college in Tyler, Texas. He joined the Navy on July 9, 1940, and went to Great Lakes Training Center. Willy was sent to San Francisco then finally to Pearl Harbor to board the U.S.S. Oklahoma. He held the rank of Fireman First Class. The local VFW Post in Titonka carries his name.

The remains of the 429 sailors and Marines killed on the Oklahoma were found in the months and years following the attack, but the effects of decomposition allowed only a small number to be positively identified.

In 1944, the bodies of the unidentified were buried as "unknowns" in two Hawaiian cemeteries. They were exhumed three years later in an attempt to identify them using dental records, but when those efforts proved unsuccessful, they were reburied in 1950 in 61 caskets at the National Memorial Cemetery of the Pacific in Honolulu.

More than half a century later, in 2003, one of those caskets was dug up and five crewmembers were identified thanks to modern DNA testing. Four years later, another casket was disinterred and an additional member of the Oklahoma's crew identified.

In light of those findings, the U.S. Department of Defense announced in 2015 that the remaining caskets would be exhumed and efforts made to identify the rest of the 388 unknowns of the Oklahoma's crew and return them to their families.

"Thank you Willy for what you did for our country. Welcome home where your remains lay, but mostly welcome to our true home in heaven, surley the angels sang and when you looked in the face of the Lord, he said, "well done my true and faithful servant" God Bless America!"

"William Kennedy was my mother's cousin, and this is a wonderful occasion and tribute to a fallen military person. Her first husband was killed in action in Patton's army in 1944. Military ceremonies and cemeteries are meaningful and wonderful remembrances for those who have defended us in time of war. Doug Aldrich, Denver"

"Rest in peace, you made the ultimate sacrifice for our country. Thank you and your family for your service. Welcome home sir."

"I would just like to say THANK YOU, to you and to your family for your Sacrifice. A true American Hero. Welcome home sir. "

"No one had to ask them, they just knew they had to go. They leave their homes & loved ones, with all its joy, and go to lands afar. They sacrifice their life so that we can all be free. Welcome home and rest in peace!"

"Thank you to Mr. Kennedy for his service to our country and giving the ultimate sacrifice for all of us. May God grant his family the peace they have so long awaited. No greater sacrifice than to lay down ones life for his country. Rest in peace. "

"A true American hero. God bless him and his family, and may they all find peace in finally having him home. May his soul, and all the souls of the faithfully departed, through the mercy of God, rest in peace. Amen.."